They say “Never meet your heroes”…..
but it’s just NOT true

interesting blogs and all Sam’s individual and group coaching offers 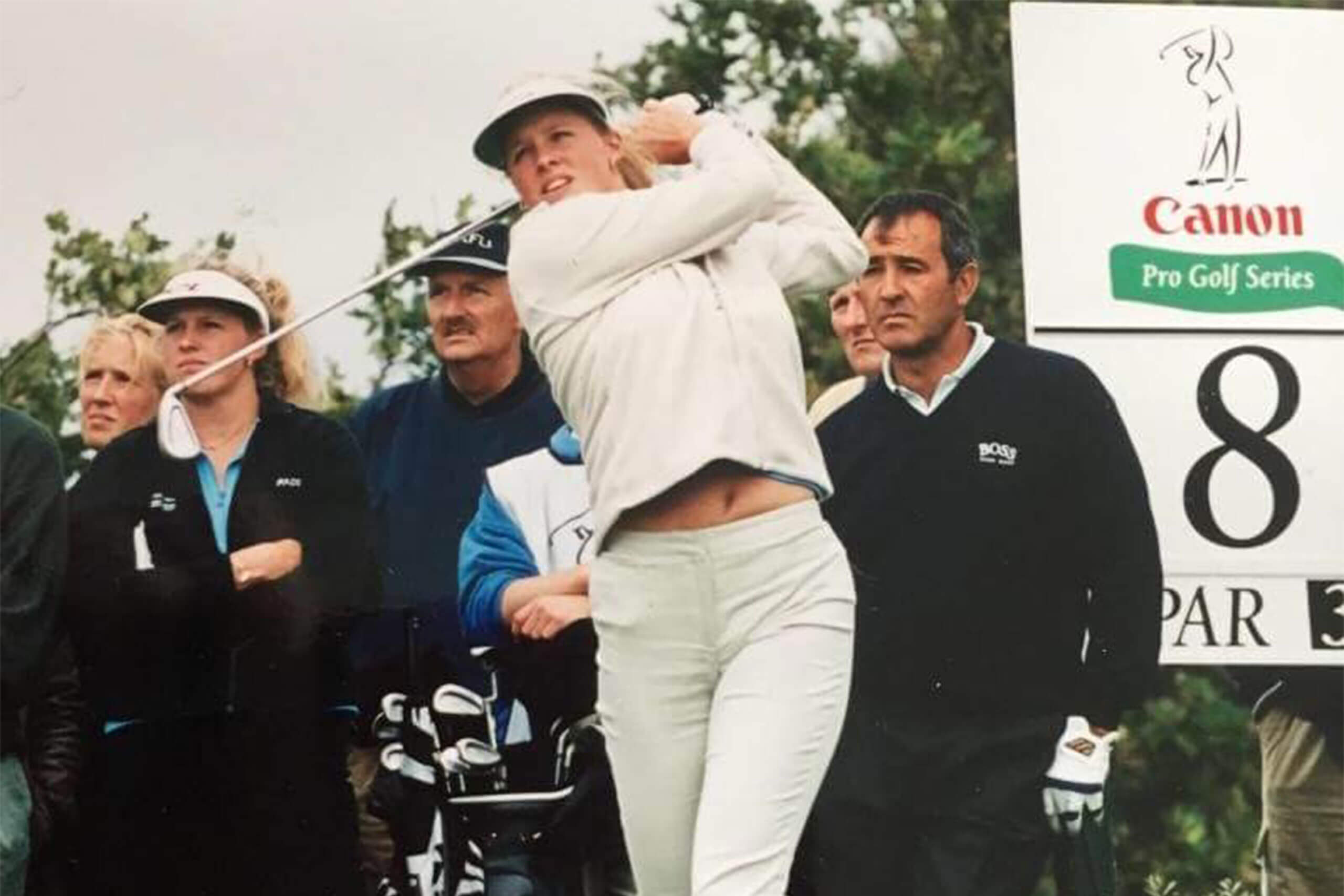 In my fifteen years playing the Ladies Tours in Europe, Japan and the USA, I had some great experiences.

I won six times which made me incredibly proud, especially the 1999 Italian Open and 2001 South African Open and I twice won at the ultra competitive & extremely nerve wracking Tour Schools just to get onto the European and Japanese Tours.

However, one of the great thrills was to be invited to play an exhibition match with my hero Severiano Ballesteros.

He was the king and what a day it was for me and my twin sister Johanna, who is also a professional golfer.

Sam has been hosting trips to Sueno since 2015 and for for good reason.

The year was 1999 and I was invited to attend the Canon Series of golf events throughout Europe.

This particular event was in the Netherlands and Seve had been invited to attend along with Bernhard Langer and Constantino Rocca for the men with my sister Johanna Mundy, Sofia Gronberg and me for the women.

If you think he looks a bit unhappy in the photo, he was….he’d just hit a shank!

Playing with your hero is bizarre. The situation felt surreal standing on the first tee, side by side on the same stage with a Ryder cup, Masters & Open legend. He stood on the tee as the crowd fell completely silent and, with a 1 iron in hand, promptly shanked his first shot!

No one dared say a word and with an expressionless face he put his hand out for his caddy to throw another ball to him.

He proceeded to duck hook the second ball into thick gorse to the left of the tee and embarrassed for him, I looked around to see if anyone was making a comment. I was thinking, hell, this guy is a legend and even HE can hit shots like that………FIRST good lesson. 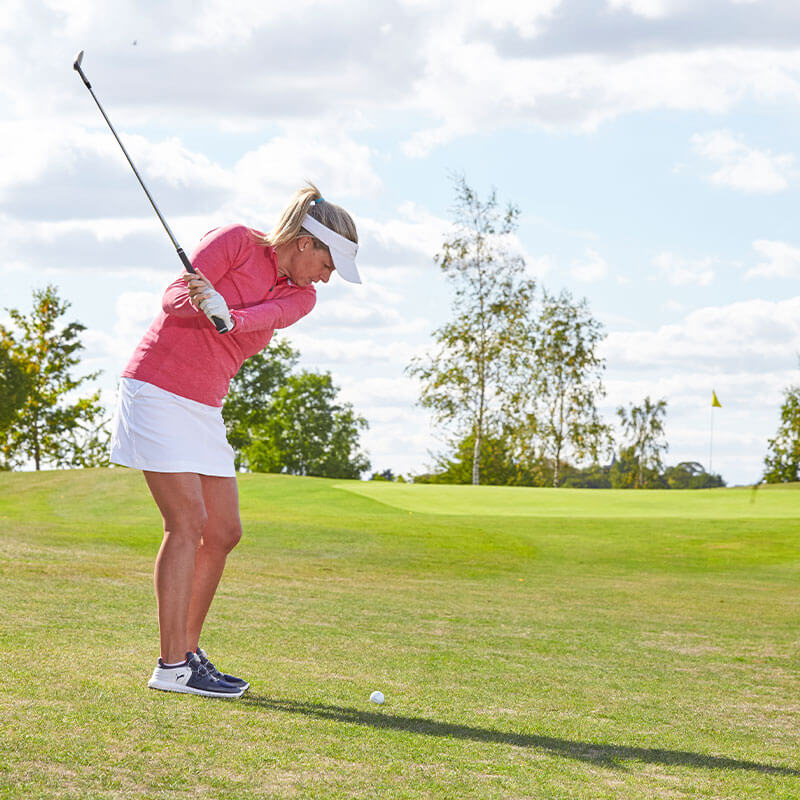 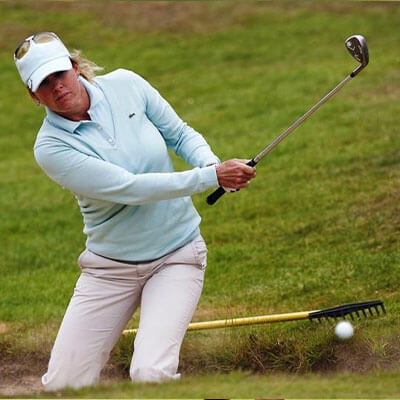 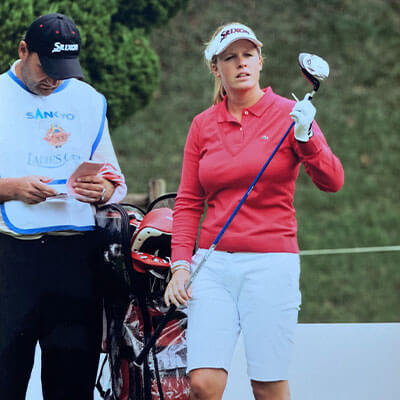 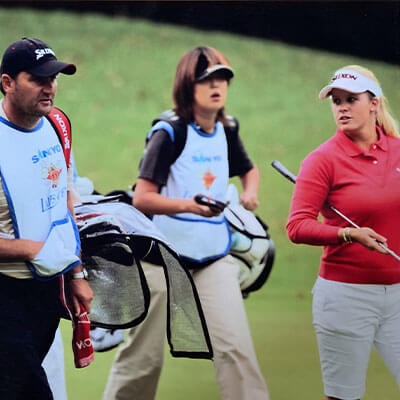 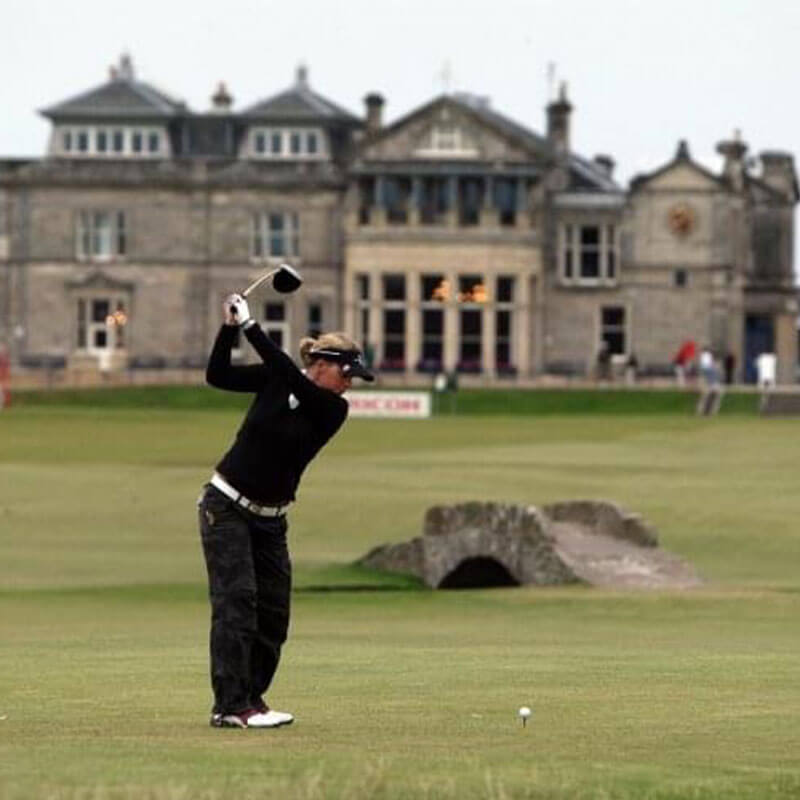 I saw Seve shank, hook and slice and we still couldn’t beat him!

However, the other pro, Constantino Rocca, whispered to me, that what Seve had just done was very normal “you watch him from here”.

In thick undergrowth, Seve knocked the ball out and holed the putt for a bogey. The round continued like this with Seve finding every bush, tree and a few different fairways. However, he was always in contention to challenge us for the win and more often than not he would take the hole……..SECOND good lesson.

Playing with a champion like Seve showed me that the swing is only part of the ability a golfer needs to succeed.

Shortly after I played in that match, I won the 1999 Italian Open and it was a week I hardly went to the range at all!

Don’t get me wrong, I practiced as hard as anyone but only on and around the greens. It made me so sharp that I hardly made any bogeys and made important up and downs on par fives for much needed birdies too.

At the end of the week, I had saved countless shots and won by just one shot……and there’s a lesson in there for you too! 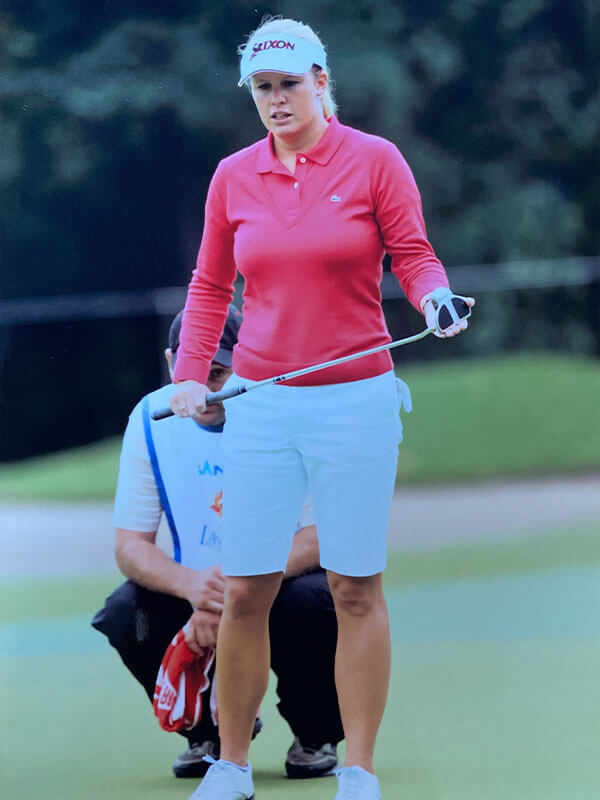 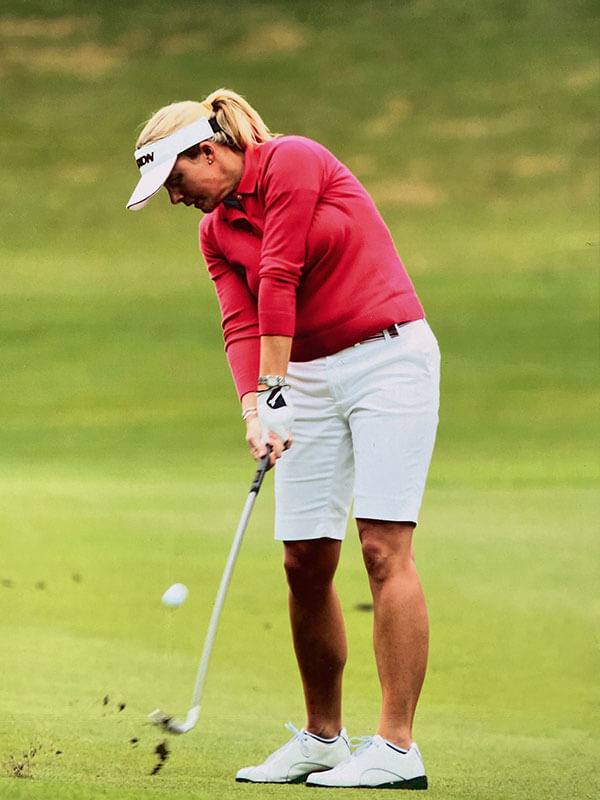 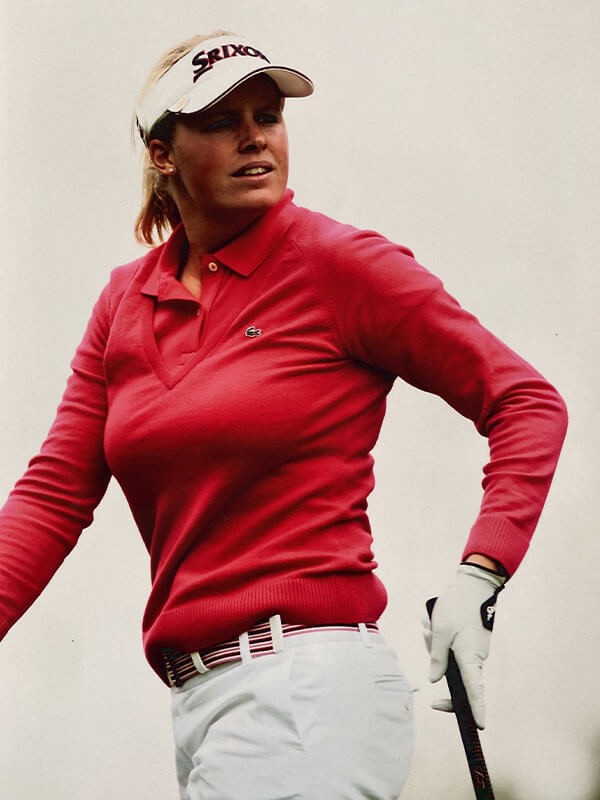 Talking of Lessons….here’s how to REALLY get better at golf

To improve your game, don’t just focus on the swing. The shots for 40 yards and LESS are just as important and you have to be great from 6 feet and less as well so that when you hit a good shot, you hole the putt too!

So my message is that, yes, the long game matters but in golf you need a complete set of skills.

This takes time, so a lesson programme with a trusted coach and a long term focus is the only real way to get lasting improvement.

What better way to learn from a qualified PGA Coach who has been there and won on tour too?

So if you’re interested in playing your best golf and having a Six Time Tour Winner as your mentor then click here for more information…. 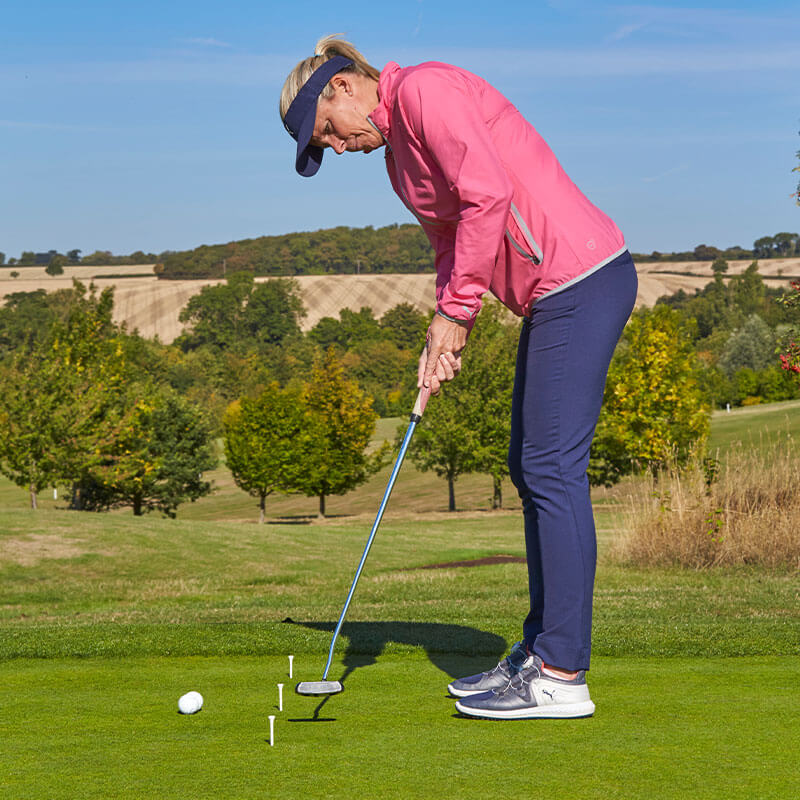 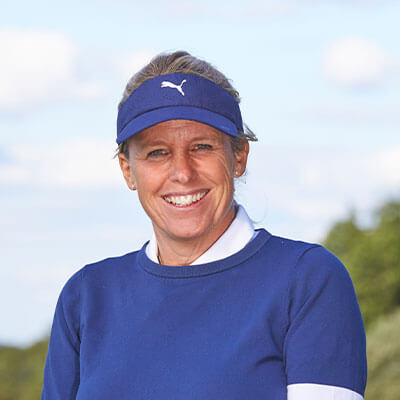 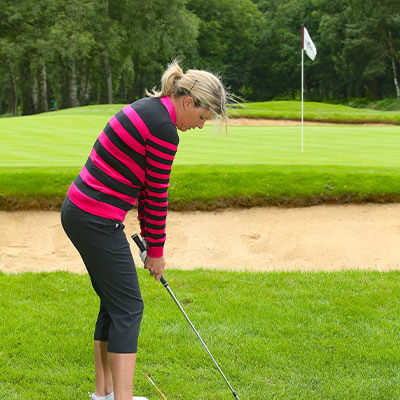 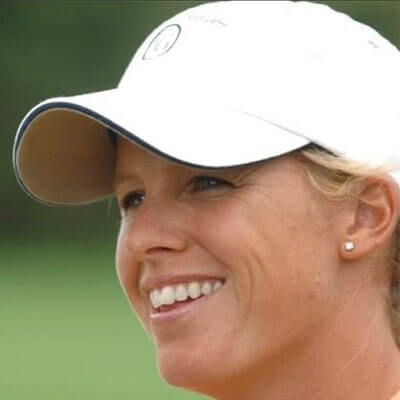 We use cookies on our website to give you the most relevant experience by remembering your preferences and repeat visits. By clicking “Accept”, you consent to the use of ALL the cookies.
Cookie settingsACCEPT
Manage consent

This website uses cookies to improve your experience while you navigate through the website. Out of these, the cookies that are categorized as necessary are stored on your browser as they are essential for the working of basic functionalities of the website. We also use third-party cookies that help us analyze and understand how you use this website. These cookies will be stored in your browser only with your consent. You also have the option to opt-out of these cookies. But opting out of some of these cookies may affect your browsing experience.
Necessary Always Enabled
Necessary cookies are absolutely essential for the website to function properly. These cookies ensure basic functionalities and security features of the website, anonymously.
Functional
Functional cookies help to perform certain functionalities like sharing the content of the website on social media platforms, collect feedbacks, and other third-party features.
Performance
Performance cookies are used to understand and analyze the key performance indexes of the website which helps in delivering a better user experience for the visitors.
Analytics
Analytical cookies are used to understand how visitors interact with the website. These cookies help provide information on metrics the number of visitors, bounce rate, traffic source, etc.
Advertisement
Advertisement cookies are used to provide visitors with relevant ads and marketing campaigns. These cookies track visitors across websites and collect information to provide customized ads.
Others
Other uncategorized cookies are those that are being analyzed and have not been classified into a category as yet.
SAVE & ACCEPT

Many thanks, you have subscribed to Sam's Newsletter